The history of the temple of Karnak

The Karnak temple is considered one of the most famous and largest temples in Egypt, especially in ancient Egyptian and Greek history, it was built for various reasons related to religion and ancient history, the main reason why they built the temple was to worship the famous god “Amon” and his wife “Mut” and their son named “Khons” because inside the temple there are temples dedicated to every king.

The temple included many historical buildings and many complexes in every corner of the temple that has formed a whole picture for the ancient Egyptian history for a great period reaches 2 thousand years, the period in which it was built the temple of Karnak was a period to respect coming to the government of the Ptolemies, so we can say that it is 100% a place to visit in Luxor. 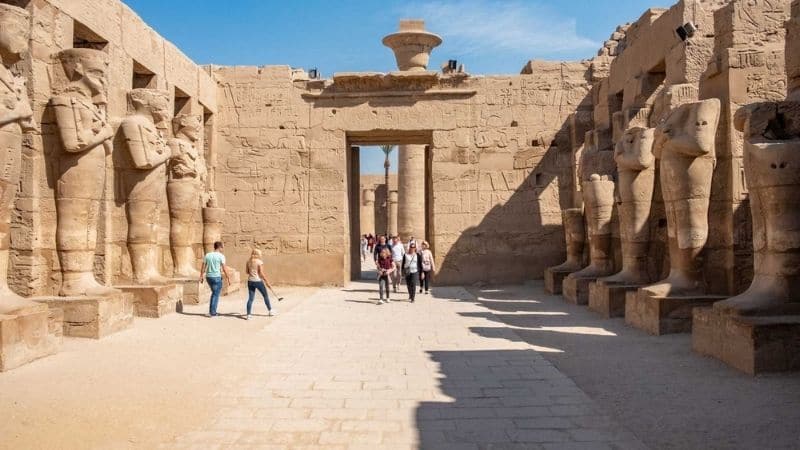 The secret of the name of the Karnak Temple

Surely there is a big secret why they named the temple the temple of Karnak, some say that the name of Karnak is derived from an ancient Arabic name called “Khornaq” and means “the guarded village”. Then they considered the “Karnak” as a sacred place and seat for the Oblation of Amon.

A special visit to Karnak represents a real journey into the heart of Egypt during the Ancient Kingdom. This huge temple complex was the center of the ancient religious cult while administrative power was concentrated in Thebes (today’s Luxor) and this significance is reflected in its mammoth dimensions.

Beyond the religious function, the site also served as the administrative center and seat for the pharaohs during the New Kingdom era. Karnak is probably the largest monumental complex ever built in the world, developed from generation to generation over 1500 years, and resulting in a composition of temples, shrines, and architectural elements unique in Egypt.

Consult the offers Egypt would be the most suitable choice for those who want to know and discover as much of Egyptian Pharaonic history as the pyramids and the sphinx.

The monumental structure of the temple of Abu Simbel:

The structure enjoyed the greatest importance during the era of the New Kingdom, under pharaohs such as Hatshepsut, Tuthmose III, Seti I, and Rameses II who contributed, one after the other, to the development of the complex. The subsequent structural expansion continued during the Greek-Roman period with the Ptolemies, then with the Romans, and finally with the first Christians. In fact, each of these civilizations left its important mark.

Karnak is divided into three sections: the precinct of Amun, that of Mut, that of Montu. Its complex layout diminishes, in terms of size, any other monumental site in Egypt. The precinct of Amun contains all the most famous sections of the Karnak complex, including the dizzying Great Hypostyle Hall, one of the most impressive sites in all of Egypt.

In detail, the description of the different elements that make up the complex is a difficult task that we will leave to the tour guide. Rather, we suggest you take some time to explore this enormous complex, in general, to admire its beauty and imagine what it might have looked like 2000 years ago.

Like every other monumental place in Egypt, Karnak features a night show of sounds and lights in different languages. For more information, please contact us at Egypt Time Travel. 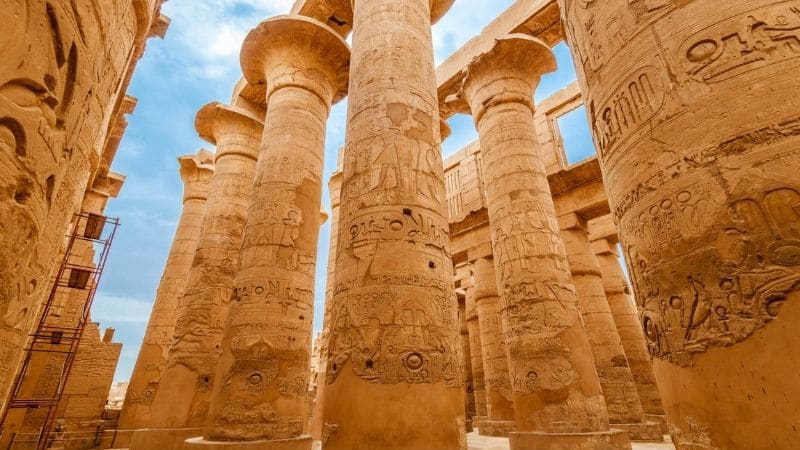 A sightseeing tour of the Karnak temple is always recommended and preferred by tourists when visiting Egypt especially in Luxor and Aswan, you will have the opportunity to discover the secrets of the ancient Egyptian pharaohs and the history and pharaonic civilization.

Discover Egypt with us … Check out our Vacation packages to Egypt & Nile Cruises!