Luxor Temple is one of the most fascinating and ancient monuments in Egypt especially in Luxor and represents the beauty and power of the Pharaonic era and the effect of the will and its role to build such a great monument, it was built by the king of Amenhetop, was the son of Habu and the period of government lasted from 1391 until 1353 BC, located on the east bank of the Nile, the temple of Luxor is a popular destination for tourists who love the culture and history of the pharaohs and the temple of Luxor explained how the pharaohs thought at that time and what was their ideal way to make a historical and political development.

The temple of Luxor included 2 very large and fascinating obelisks thanks to the design made especially at the temple, one is located in Luxor and the other was stolen and found in the place de la Concord in Paris.

They also found the epigraphs for the king on the first door of the temple and those epigraphs explained the events of history and Pharaonic civilization and the life of King Ramsis II and his victory in the battle of Qadesh and there were 6 statues on the doors and there were 72 columns built in a very professional way.

The legacy of the Temple of Luxor Egypt :

This temple could be the main legacy for which Luxor has earned the nickname of “the world’s largest open-air museum“, located right in the center of the modern part, which occupies the site of the ancient Egyptian capital, Thebes. The temple is one of the oldest and best-preserved monuments in all of Egypt, with a large number of rooms, structural elements, and bas-reliefs still intact, making it one of the most interesting sites in Luxor and all of Egypt.

In addition, the charm of the place is enhanced by the natural context in which it is located. Few places in Egypt give such a clear and immediate image of the extraordinary past of Egyptian history.

Amenhotep III and Ramesses II and the construction of the temple of Luxor:

Amenhotep III, one of the most active pharaohs in the architectural sense of Ancient Egypt, built the temple during the New Kingdom, a period that ended between 1390 and 1352 BC and always loved civilization and architectural development and always aimed to improve the capital of Egypt and the infrastructure of the city.

Ramesses II, besides being a prolific builder, enhanced and reused many existing monuments to increase his prestige, and among his various projects, the statues and bas-reliefs that decorate the temple are in fact mainly due to this pharaoh.

The temple of Luxor, as well as the temple complex of Karnak, are the most famous monuments around the city, both located on the east bank of the Nile. In the past, an avenue of sphinxes, which ran about thirty kilometers long, connected the two sites. This avenue is currently being excavated, but the part closest to the temple of Luxor has already been restored. 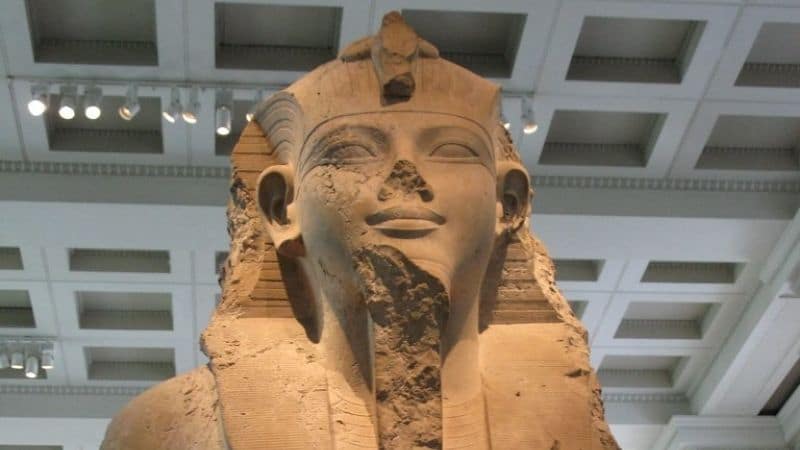 The temple is a means of entertainment in ancient history:

Its ideal location in the heart of Luxor makes the temple very easy to reach at any time of the day, and even when not open to visitors, it is visible during a walk along the banks of the Nile, or from the city center itself. We highly recommend a visit to the temple during sunset or in the evening with the moonlight.

In fact, the night lighting wonderfully highlights the relief sculptures standing out on the imposing walls of the building.

Luxor Temple was dedicated to the Theban triad of Amon, Mut, and Khonsu during the New Kingdom and was the center of Opet’s annual feast where a statue of Amon was moved along the Nile from the nearby Karnak Temple for a fertility rite.

Construction of the Temple began during the reign of Amenhotep III in the 14th century BC. Haremhab and Tutankhamun added columns and statues but the greatest expansion came with Ramses II about 100 years after the beginning of the works. The Temple of Luxor is the only one of the major Egyptian temple complexes to have the marks of only two rulers on the architectural structures.

Visit Luxor temple and all the Egyptian famous attractions with Egypt Time Travel, Check out our Egypt Vacation Packages now!