What is the capital of Egypt: Facts about Cairo

Cairo Egypt: We remind you the most famous phrase in the world and always said by the people of the world is ” Egypt is the mother of the world ” surely is a very common saying and has many explanations from the countries of the world. Egypt is an African country that speaks the Arabic language and then comes the English language in the second position and some of the Italian language, French and German.

Egypt is a country that is located in the Middle East and according to the most recent statistics have confirmed that Egypt is the fourteenth country in the world in terms of the number of inhabitants living in Egypt. The numbers of inhabitants are more than 101 million inhabitants between Christians and Muslims and they live there with all the love and passion for their country.

Egypt is also a very cooperative country for other countries living in the same African continent and a strong bridge through which you can reach the African and Asian continent, so there are many political, geographical, and economic advantages to exploit in Egypt.

Cairo in Egypt, is considered the Egyptian capital and in Arabic is called Al-Qahira, which means “the Victorious”, is the capital of Egypt, the largest city in the whole of Africa and the Near East, and the thirteenth-largest metropolis in the world for size and number of inhabitants (20 million if you consider the entire metropolitan area). Egypt has fought for many years against enemies who wanted to conquer Egypt but in the end, they failed thanks to the will of its people and the fortress and control of the military army. 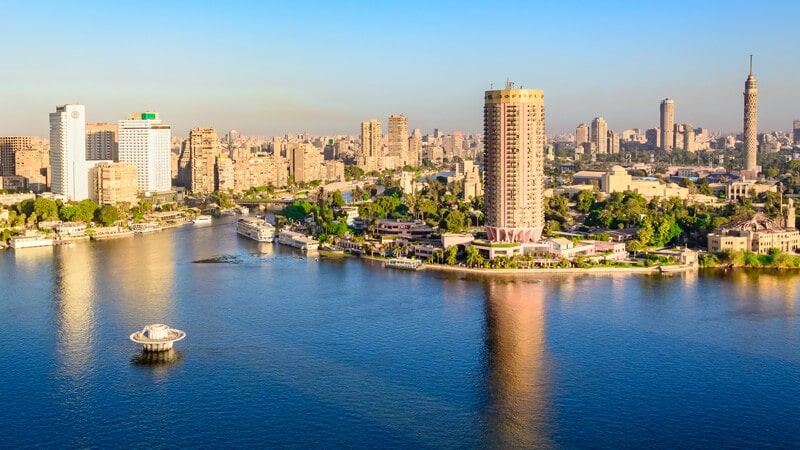 The ideal location of Cairo

The city of Cairo is located in northern Egypt, on the right bank of the Nile, just south of the point where the river divides into the two branches of Rosetta and Damietta, which form the delta region. It is an administrative center for the inhabitants who want to extract important documents or for those who want to visit a tourist center or a place like the pyramids and the sphinx, the market of Khan El Khalili.

Cairo’s history and things to visit

Founded in the Pharaonic era under the name Heliopolis, this metropolis has collected over the centuries testimonies and legacies of the most diverse cultures and religions. In addition to the area of Giza and the pyramids on the outskirts of the city, the best starting point for a visit that wants to retrace its history in chronological order is certainly the Egyptian Museum, where is kept an impressive amount of evidence, collection of artifacts and remains of Egyptian civilization.

Apart from the Egyptian museum there is also the sphinx is the statue that was built in front of the Egyptian pyramids that affirms the skill and the fortress of the ancient Egyptian pharaohs, you can also visit the Cairo tower where you will have a panoramic view of most of Cairo.

The river of the Nile and the ancient Islamic history and archaeological monuments that represent the civilization and history of the pharaonic era, the river of the Nile on which you can take a nice cruise on the Nile to Cairo and Luxor, Aswan and always a preferable request for most tourists visiting Cairo.

The most admired is certainly the exceptional treasure found in Tutankhamun’s tomb, which includes priceless artifacts such as the golden mask of the pharaoh, a jewel endowed with an almost magnetic force of attraction, capable of distracting the visitor’s gaze from any other object on display.

Equally fascinating are the statues of Rahotepe and Nofret, which are striking for the liveliness and originality of the colors, and the majestic and disturbing statues of Pharaoh Akhenaton. Recently a new section has been opened dedicated to the centenary of the inauguration of the museum. Access in some areas involves the payment of additional costs over and above the cost of the access ticket.

It is also worth visiting the Old Cairo, where the Roman-Byzantine fortified city of Babylon stood, home to countless religious buildings that bear witness to the great variety of cults that have passed through Egyptian history. These include the Hanging Church “El-Moallaqa”, the Synagogue of Ben Ezra, and the mosque of Amr Ibn El-As, the oldest in Egypt.

Also of great interest is the museum dedicated to the Coptic religion and civilization, a variant of Christianity widespread in Egypt and Ethiopia; the area of the Citadel, built-in 1176 by the famous Saladin and home to numerous mosques, including the Mosque of Mohammad Ali, also known as the Alabaster Mosque, and finally, the ancient Islamic City, which houses the famous El-Azhar Mosque with the largest university dedicated to Islamic studies and the Qalaun Mosque, one of the most popular and frequented by the inhabitants of Cairo.

Don’t miss the bazaar of Khan El Khalili where, in an atmosphere imbued with oriental aromas, you can find goods of all kinds: from multicolored fabrics to reproductions of finds from the Pharaonic period, from glass objects to essences and perfumes kept in pretty bottles. [ Check our Cairo tours ]

Book a day tour to discover the Coptic & Islamic Cairo.

How to get Cairo

The climate in Egypt is always a very important advantage in the field of tourism since in the summer the temperature is temperate on the average, while in winter it is a little cold but not too much compared to Alexandria since it is a country that overlooks the sea when we talk about Sharm El Sheikh we must say that it is a city of a very famous tourist destination and a lively flavor to try.

The new capital of Egypt

In 2015 the Egyptian Minister of Housing “Moustafa Madbouly” confirmed that in the future there will be a new capital or a new city or a new administrative center in ‘Egypt for administrative and financial affairs and in this capital there will be all the foreign embassies and the seat of parliament in the same place.

It was built on an area of 700 square kilometers and this project included the relocation of the presidential palace from Cairo and the parliament building and many other administrative buildings and also said that the main reason for this new capital is to give a large space to the inhabitants of Cairo because of the growth of Cairo’s inhabitants and make a link between Cairo and the Suez Canal.