The history of  The Great Pyramid of Cheops:

The Great Pyramid of Cheops also called (Khufu) built on the plateau of Giza and is considered one of the Seven Wonders of the Ancient World and still existing today and always visited by travelers, is the first one that appears on sight if, like most visitors, you come from El-Ahram Street.

This wonder was completed around 2560 BC, the height originally exceeded 145 meters (today reduced to 138 due to the removal of external architectural elements). Higher than any construction built before the industrial age, it is a marvel of mathematics and engineering, it was built based on highly developed geometric knowledge and techniques. 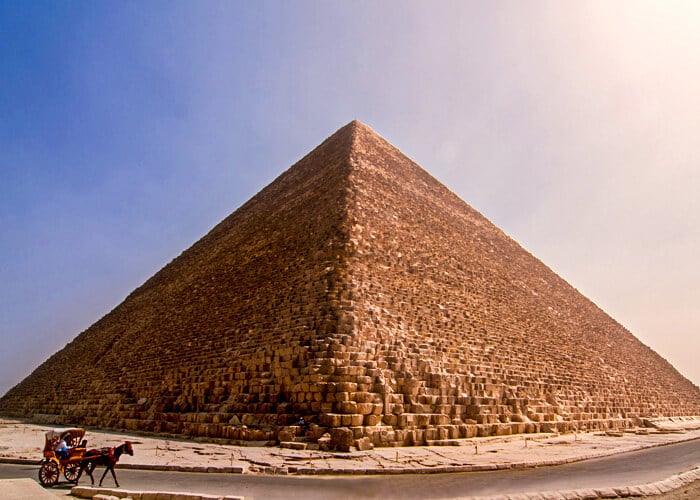 Who is Khufu and what is the secret of his name:

Khufu was the second pharaoh of the fourth dynasty of Ancient Egypt during the time of the Old Kingdom. To his sons, Chephren and Menkaure have built the other two pyramids of Giza, but neither of these two has the same imposing dimensions as the Great Pyramid of Cheops.

The construction of the pyramid of Cheops :

Cheops reigned from 2589 to 2560 BC, the pyramid dedicated to him as we have seen is the oldest and largest of the three. It has been estimated that it consists of 2.5 million blocks of limestone, each weighing 2.3 tons, but it would seem that some of the stones placed at its base are even around 15 tons.

The fourth dynasty is considered a golden age for the Old Kingdom, mainly because of its imposing, almost gigantic dimensions and the particular workmanship of the pyramids built during this period. Since the construction of the pyramids of Cheops’ father, Sneferu, in Dahshur, the pyramids of the Fourth Dynasty are in fact, larger and look better than the others built earlier or later.

The word pyramid comes from the Greek language, “pyramis”, for the Egyptians the pyramid was the way to guarantee the immortality of the pharaoh and consequently of their kingdom. To be effective in this, the pyramid necessarily had to be completed before the death of the pharaoh.

At a third of the height of the Great Pyramid, about 45 m from the base, is the King’s Chamber, discovered by Caliph Ma’mun, around 820 AD.

When it was opened it was thought that a treasure proportionate to the size of the monarch would be found, instead of with extreme surprise, the Pharaoh’s Chamber (funeral according to orthodox Egyptology) was found empty and bare, there were not even the decorations or inscriptions that originally must have been placed on the walls, the only thing that was found in the granite sarcophagus, also empty.

Inside the Cheops Pyramids

The entrance to all the pyramids was made on the north side because the ancient Egyptians believed that the spirit of the dead would inhabit the north star. If you pay attention, you will notice that in the Cheops Pyramid there are two entrances because in the past there was a coating on the pyramid that you couldn’t see where the original entrance was, so Chalif Al Ma’amoun opened another entrance further down, and this one it is the entrance that tourists use to see the interior of the great pyramid.

The importance of the Cheops Pyramid

Archaeologists consider pyramids as good indicators of the economic and political stability of Ancient Egypt. It is notable that large resources were needed to finance a pyramid and organize a workforce to build it. The size and quality of its construction at different times throughout the history of ancient Egypt suggest that in its day there were more resources available to dedicate to the building during the fourth dynasty than at any other time.

Khufu improved the innovations that his father introduced in the construction of the curved pyramid and the red pyramid, located south of Giza in Dahshur. The Pyramids of Sneferu were large and they are the first to exhibit the smooth sides characteristic of the Pyramids of Giza, but the shape of the pyramid and the ideal lateral angle needed to complete a structurally sound pyramid were settled in the Khufu reign.

Related FAQs about Pyramids of Cheops:

1- What is the Cheops Pyramid?
The Khufu Pyramid (Cheops) is one of the Seven Wonders of the Ancient World, the only one that still stands today, in Giza, Cairo, Egypt.

2- Where is the Cheops Pyramid?
The great Cheops pyramid is located in the Giza Necropolis in the Haram region. The site also includes the two other pyramids of Khafre and Menkaure, the Sphinx, the Temple of the Valley, and the Museum of the Solar Boat.

3- How tall is the Cheops Pyramid?
The Khufu pyramid is 138 meters high, completed around 2560 BC. The sides of the Great Pyramid of Khufu rose at an angle of 51.8 degrees, the base is 227 meters. The Khufu pyramid was originally 147 meters high, but due to the removal of its outer shell and lining, it lost 9 meters in height.

4- How was the Cheops Pyramid built?
The pyramid project was carried out under the supervision of the architect Hem-euno, 7,000 thousand years later it remains the only and the best in the business. The construction lasted 20 years with the labor of more than 20 thousand workers. More than 2300 million stone blocks were used in the project, with weights ranging from 2.5 to 15 tons, and in the funerary chamber, the blocks weigh up to 51 tons.

5- Is the king’s chamber advisable or not?
The King’s Chamber can be visited, it is accessible thanks to a staircase of a few meters placed on the outer facade of the Great Pyramid, it is not an advisable experience for everyone, although surely anyone would like to be able to say they have entered a pyramid. Before arriving inside you have to juggle with steep inclinations and limited space, it is not recommended to those who suffer from claustrophobia or heart problems, but everything is clean and well-lit and you can help in the descent and ascent with handrails and wooden ramps.

10 amazing facts about the Great Pyramid of Cheops

1- It is composed of 2,300,000 blocks of stone
The weight of the blocks is varied and ranges from 900 to 30 thousand kilograms. In its interior, the temperature maintains a constant 20° C. It was covered with limestone that made it reflect light as if it were a giant mirror.

4- It has revolving doors
Besides this pyramid, only two others have this type of door: Huni and Snefru. The three were son, father, and grandfather, respectively. Although it weighs several tons, Giza’s revolving door is very easy to open from the inside and practically impossible to find from the outside.

5- One of the 7 wonders of the world
Of the 7 Wonders of the Ancient World, the Giza Pyramid is the only one that remains standing. Also, it was the tallest building in the world for thousands of years, more precisely until 1889, when the Eiffel Tower was built.

7- It was not built by slaves
For many years it was thought that the pyramid was built by thousands of slaves, but Egyptologists have accepted that it was many skilled workers who led this project. Cheops’ nephew planned the construction and the pharaoh spent a lot of money dressing and feeding the workers with quality products.

8- It was built with levers
Although its construction was always mysterious, it is known that the easiest method could have been with wooden or bronze levers. Once the first step was established, a machine made of logs was used to lift the stones to the second step, and so on.

10- A boat was also found there
At the base of the pyramid, a well was found with an unarmed boat, which was later assembled and preserved in a museum. In the stones that covered the well was found the name Dyedefra, son and heir of Cheops, who probably put the boat there.