Giza necropolis extends over a vast area of the Giza Plateau, located 25 km south of Cairo, the Egyptian capital.

Giza is the name of the suburban city where the plateau is located, in the homonymous plain a few kilometers from the capital, on the left bank of the Nile.

This complex of monuments is the most famous image of Egypt in the world.

Some of the best evidence of Ancient Egypt can be found in the area that separates the necropolis from the rest of the city. These things are called “testimonies.”

The Sphinx, behind which rise the three most famous pyramids, the pyramid of Cheops, the Pyramid of Khufu (or Great Pyramid, the only one among the 7 wonders of the ancient world to have remained intact to this day), the northernmost, the pyramid of Khafre, and the pyramid of Menkaure, the one located further south.

The sides of the pyramids were thought to symbolize sunlight and the pyramid itself was a way of ascent to the sky. 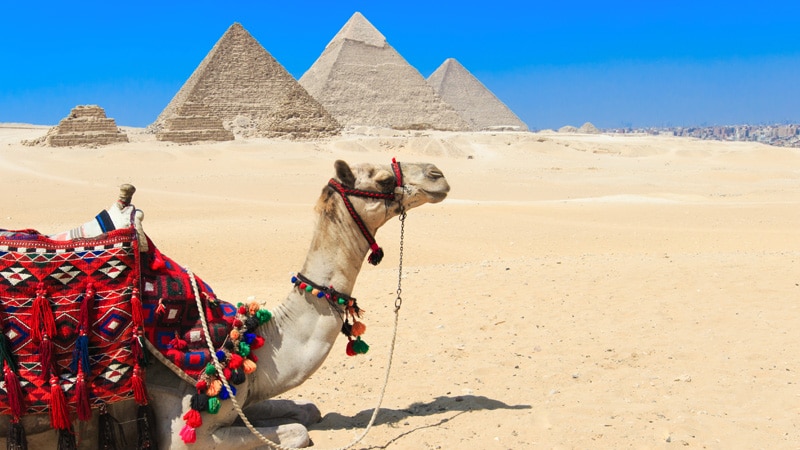 There are a lot of tombs, mastabas, and cemeteries, as well as a number of buildings for consorts, and private tombs, burials of high officials, and secondary members of the royal families.

The “Village of the Craftsmen,” which is where the true builders of the pyramids lived, and the Giza necropolis, which was built for them, were found in the same place.

There are two pyramid tombs in this village, one to the southeast of the other.

People who look at the area from above might think that only the northern part of the plateau is used by old buildings, but this is only because of the huge size of the three pyramids.

Many more tombs and graves have been found farther west than it looks.

The workers’ village and its cemeteries also make the necropolis much bigger than it looks.

The ancient history of Giza Necropolis 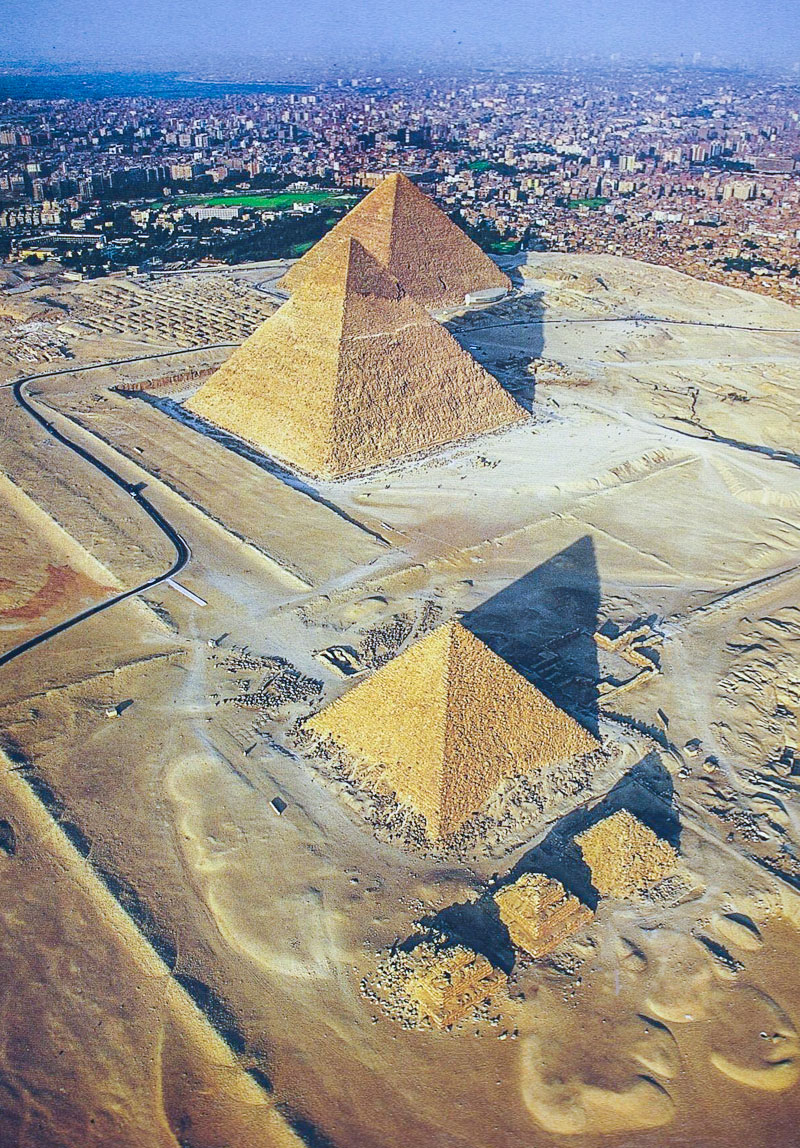 4500 years ago, Egyptian pharaohs built these huge pyramids as places to bury their dead because they were so big.

People think that the pyramid shape is linked to the sun’s worship. The pyramid’s edges would represent the sun’s rays that would spread across the earth, and its structure would be used as a way to reach the sky.

It is very rare for more than one dynasty to use the same necropolis. Each dynasty built its own.

The people from the third dynasty lived in Saqqara, which is in Egypt. They were buried in Abousir, which is north of Saqqara.

The first dynasty has used the necropolis of Saqqara since the beginning of time, and it has been used through the old empire as well. There is no rule.

If we look at how the necropolis was used during its golden age, which was between 2550 and 2450. we see that each tomb has a pyramid that serves as a tomb, a wall that protects the pyramid, a temple near the pyramid, paving, a temple at the bottom, and one or more cemeteries.

What is in the Giza Necropolis?

Called by the ancient Egyptians “The horizon of Cheops” is the largest and oldest pyramid of the complex.

What you see today is the structural base of the Great Pyramid because originally it was covered by a smooth stone covering.

It is still possible to see some original boulders around the base.

Inside the Pyramid of Khufu was discovered, in addition to the underground chamber, located in the lowest level on which the pyramid was erected, the Queen’s Chamber and the King’s Chamber.

The construction of the pyramid is still a subject of interest for scholars because, for its construction, which lasted 23 years, about 100,000 large blocks of concrete were quarried each year; each of them, weighing about 2.5 tons, was transported to the site of the construction and stacked up to a height of 147 meters.

In the centuries following its creation, the Pyramid of Khufu was the object of numerous studies by the successive ruling dynasties, not so much to preserve the monument, but to be able to access and take possession of any treasures inside it.

In any case, Khufu’s bodies and grave goods were never found and probably fell into the hands of the tomb looters of the time.

Known by the ancients as the “Great Chefren”, this pyramid belongs to the son of Khufu, who succeeded his father in the role of sovereign.

Although it was designed on a slightly smaller scale than the Pyramid of Khufu, the Pyramid of Chephren, currently 136 meters high, appears as the largest of the complex.

This effect is caused by the greater inclination of the walls and the presence of a rocky “pedestal”, about 10 meters high, above which the pyramid was erected.

A unique feature of this pyramid is the presence, in the upper part of the structure, of the thin stone slabs that originally covered all the pyramids.

The last of the pyramids built in the Plain of Giza is that of Mycerinus, known to the ancient Egyptians as “Divine is Mycerinus”.

Smaller in size than the others, with “only” 66 meters in height, this pyramid reveals a certain inaccuracy in its construction.

In fact, it was made with stone blocks larger than those used in the other structures but positioned in a much less schematic way and the initial project had to be revised, after the premature death of Mycerinus, replacing the precious red granite of Aswan with the more common white limestone. 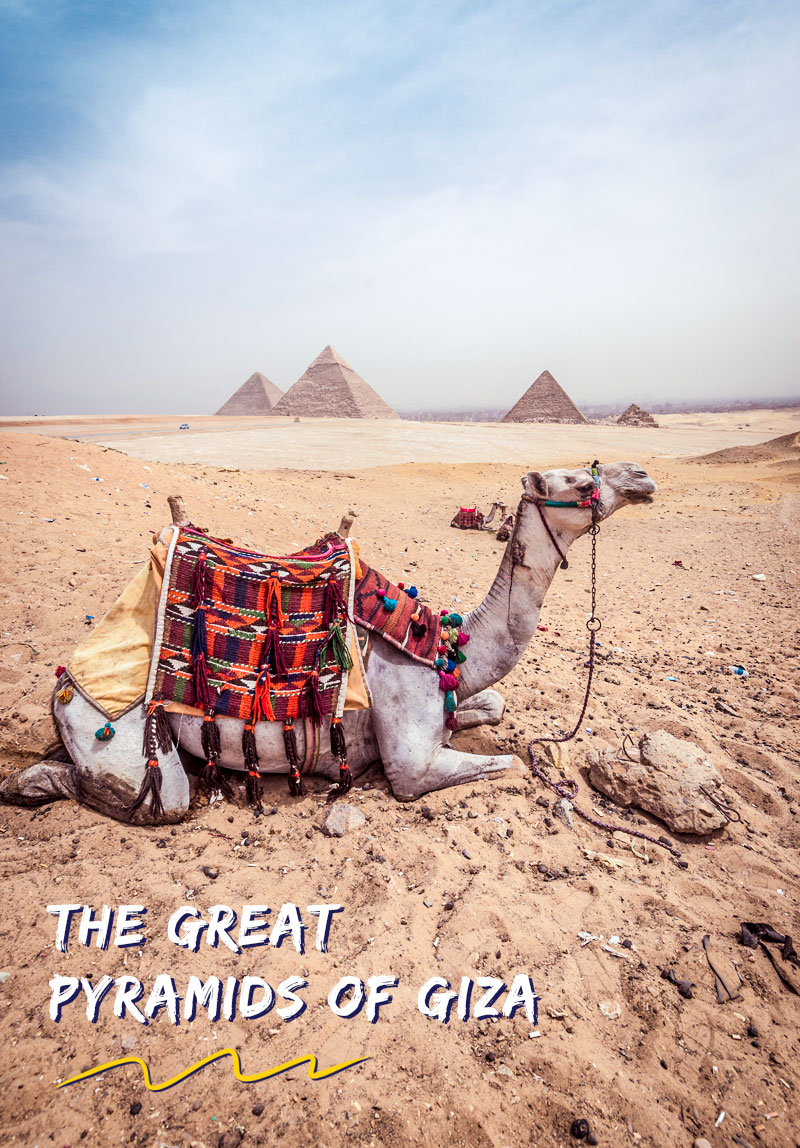 The Sphinx of Giza, part of Chefren’s funerary complex, is placed on a stone platform next to the processional ramp leading to the temple downstream of Chefren, the place where the deceased pharaoh was prepared for the afterlife.

The statue, an imposing lion with a human face, is 73.5 meters long, 20.2 meters high and 19.3 meters wide; the Sphinx was carved from a block of rock to represent and protect the Pharaoh Chefren.

The present conditions of the statue are not the best because it was built with low-quality stone and suffered, in addition to the erosion caused by sand and weathering.

The great interest in this ancient monument is also fed by the many legends that surround it, including the presence of secret rooms hidden under the body of the Sphinx. 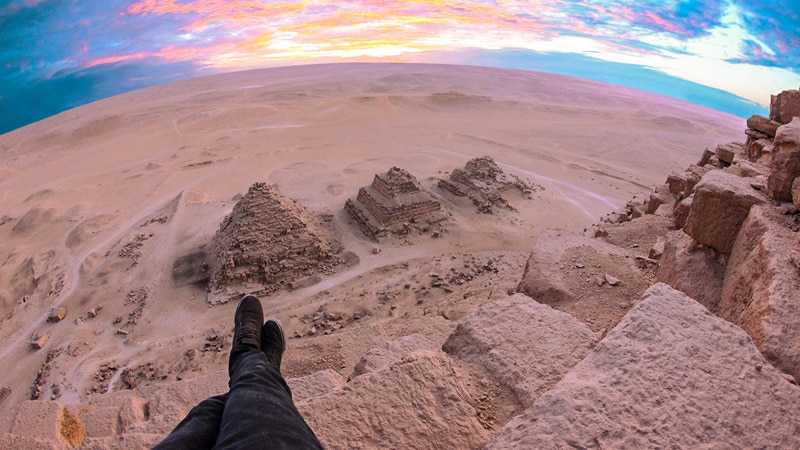 The mysteries of the Pyramids of Giza

In addition to the staggering figures mentioned just before we can not fail to mention some of the mysteries of the Pyramids of Egypt:

The pyramid of Khufu is exactly aligned with the other two: the pyramids of Chephren and Menkaura, or Mycerinus, following the stars that form the constellation, Orion.

The passage to descend into the pyramid indicates the polar star, known as Alpha Draconis.

It is believed that it is because the pyramids of Giza were associated with Osiris, the god of rebirth in ancient Egypt.

According to recent research, if the perimeter of the base of the Great Pyramid of Giza is divided by twice its height, the result is about 3.14; that is, the value of the pi-greek number.

The King’s Chamber also contains a pi-greek in the ratio between the length and the perimeter. Simply amazing.

With almost 5000 years, the way the pyramids of Egypt were built is still a mystery.

The Great Sphinx is even older. It has been called the eighth wonder of the ancient world many times, and new research says it could be up to 10,000 years old.

Theories about the rise of the Giza Necropolis 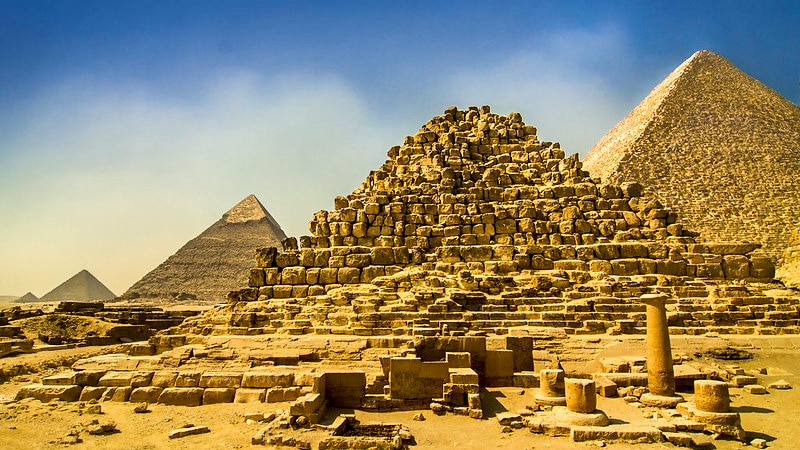 Moreover, it is thought that the pyramids of Khufu and Khafre, were accompanied by pits containing (or presumably containing) a wooden funeral boat.

Everyone knows the Sphinx, this fascinating mythological figure, is a monumental sculpture dating back to the mid-16th century BC.

It is attributed to Pharaoh Khafre (Chephren), to whom the second pyramid is also owed. The Sphinx is not only a statue, but it is also a temple that has similarities with that of Khafra.

It is not possible to determine precisely whether the face represented Khufu or Khafra.

Even nowadays scientists have different opinions, even if most of them suppose the version for which it was Khafre.

Those in favor of Khufu stress the absence of a false beard, an important attribute of the other pharaoh.

People who say that the Sphinx statue is of Khafre show that this feature is very recent. It isn’t possible that it came about after the Sphinx was studied.