Marsa Alam is located in southern Egypt, along the Egyptian east coast. It overlooks the Red Sea, on its western shore. It is located exactly 270 kilometers south of Hurghada, and 132 kilometers from Quseir, near Edfu.

Only a few years ago, Marsa Alam was a small fishing village, now transformed into an exclusive tourist resort. It has become a popular tourist destination for those who want to live a holiday in total relaxation, away from everything, enjoying beautiful beaches and unspoiled sea and its pristine coral reefs, in absolute peace. Marsa Alam offers more than 50 km of beaches, its desert landscape is truly unique, as well as its sea and the surrounding coral reefs. The town, although small, is animated by small shops, restaurants, a privately owned international airport, and some cafes.

The city has several hotels, each with beautiful private and equipped beaches with golden sand. Marsa Alam is undoubtedly considered one of the best locations in the world for diving enthusiasts because of its many diving spots including picturesque caves and a fascinating stretch of coral reef, characterized by the great variety and bewitching colors.

Among the most famous beaches in Marsa Alam is Abu Dabab beach. In Abu Dabab the turtles are a common sight, it is very easy to come across one of these fantastic creatures while diving or just snorkeling. For tourists who are looking to see something less typical, it’s a great opportunity to observe the varied marine fauna that includes specimens such as crocodiles and numerous varieties of octopuses. 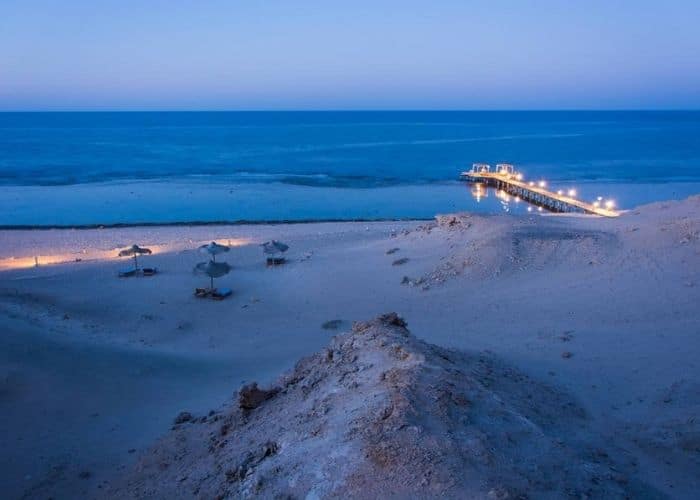 Marsa Alam also has some inland attractions to visit, such as the emerald mines, popularly known as the Cleopatra mines, although the relationship between these mines and the famous and fascinating queen, who, as reported by historical sources, seemed to particularly appreciate emeralds, is not proven. [ Check out our Egypt honeymoon packages!]

How to get there :

It`s very easy to get to Marsa Alam, there are several possibilities. As mentioned, the city has an airport, recently opened (opened in 2003, has favored the influx of tourism, previously hindered by the distance). You can reach this paradise from Cairo in 2 ways:

Despite being more than 217 km north of the tropical zone, the city is affected by a warm desert climate, with temperatures more stable than those in the north such as Hurghada and Sharm El Sheikh. Marsa Alam, Kosseir, and Sharm el-Sheikh have the hottest night temperatures of all the other Egyptian cities. The average maximum temperatures during January range from 22 to 25°C and in August from 33 to 40°C.

The temperature of the Red Sea at this location during the year varies from 22 to 29 ° C.