This small Egyptian town is located on the western bank of the Nile. It is located about forty kilometers north of Aswan, near a vast plain cultivated with sugar cane and maize. With the ancient Egyptian name of “Nubyt”, this site was at the center of one of the caravan routes leading to the gold mines of the ancient region of Nubia, which later became a training place for elephants for the Roman army.

This past rich in history does not lack in the city of today a considerable presence of archaeological sites. Among these, the Temple dedicated to the worship of Sobek and Haroeris stands out, located on a small hill from which you can admire a splendid panorama overlooking the bend of the Nile and the island of El-Mansuriya.

The Kom Ombo Temple is located in the homonymous village of Upper Egypt, in the south of the country. This place of worship was built during the rule of the Ptolemaic dynasty. It is particularly beautiful to reach the site on board a cruise on the Nile, the temple stands right on the bank of the Nile, where ships dock, it is a sight to see the figure that stands out on the promontory of Kom Ombo (the hill of Ombos) overlooking on the small recess of the river basin.

However, it is also possible to get there by bus from Aswan or by car. If you don’t want to cruise, but still want to admire the temple from the Nile, it can also be reached along the way from Luxor to Aswan on a typical boat: the Felucca. [ Enjoy with our Aswan day tours ] 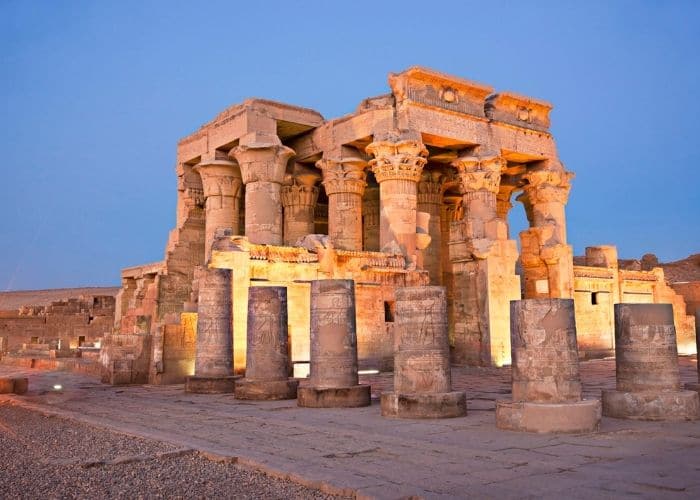 The main secret of the name of Kom Ombo

The name of the temple in the ancient Egyptian language was Pa-Sobek which means “The possession of Sobek”. Kom Ombo in Egyptian mythology represented the god of water and floods of the Nile; son of the goddess Neith, in the role of lord of the waters and fertility, she was worshiped in the capital of the XXI district of Upper Egypt: Crocodilopolis, today’s Fayoum.

The temple was initially built by Ptolemy VI at the beginning of his reign, later it was enlarged by his successors, in particular, Ptolemy XIII built the external and internal hypostyle halls.

The bas-reliefs and decorations of the temple of Kom Ombo

The bas-reliefs that decorate the sanctuaries reserve the same importance for both divinities. The decorations recall the typical elements of the Ptolemaic period with scenes of worship and priestly ceremonies; only in the back chapels are the oldest bas-reliefs in perfect condition.

One of the most interesting bas-reliefs depicts what would appear to be various surgical instruments, but not all scholars agree. In the same bas-relief, two pregnant women are represented. The temple was the destination of many faithful who came to ask for divine intercession against infirmities.

On the back of the external courtyard, a false door is depicted in precise

correspondence with the intersection point of the two wings of the temple. The entrance, on the east side, is decorated with three papyrus-shaped columns that delimit two different entrances both decorated with the winged solar disk.

In the hypostyle hall supported by ten columns, the walls are decorated with bas-reliefs, among which two particularly refined ones, both celebrating Pharaoh Ptolemy XII.

Finally, the entire building is surrounded by a double wall that creates an external courtyard also decorated with scenes of worship and priestly ceremonies.

The temple is particular because the cult was dedicated to two triads of divinities. An older and more primordial one formed by the crocodile god Sobek, Hathor, and Khonsu. The second, posterior, constituted by Haroeris, a solar manifestation of the falcon god (Horus), Tasenet-no fret sister of Horus, and Panebtani, the lord of the two countries.

Since the temple is dedicated to Sobek and Horus the old man is composed in his structure of two perfectly symmetrical bodies and the entrances that stand there are two: it has two identical entrances, identical hypostyle halls, and identical sanctuaries. The symmetrical structure of the temple is intended as a tribute to the mythological bond of the two divinities. The sanctuary on the right is dedicated to Sobek, while the one on the left to Horus. 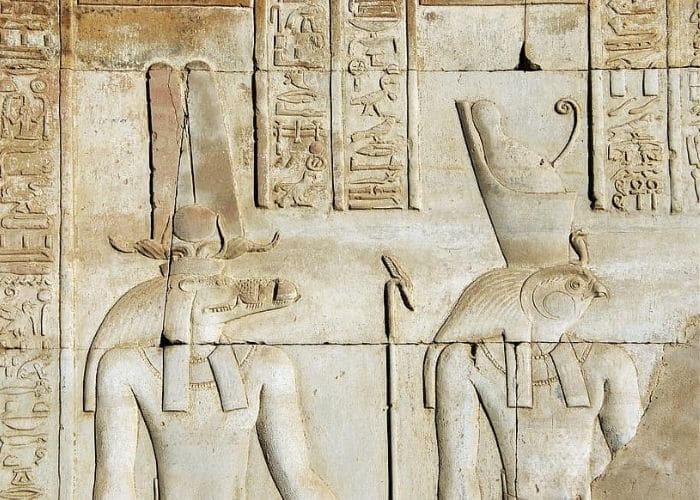 The location of the Kom Ombo temple

it also tells us a lot about the importance that the priests of Ancient Egypt gave to nature, to its cycles, and above all, it is testimony to the sacredness attributed to the Nile crocodiles which gathered on an outcrop at a bend in the Nile in ancient times.

During the visit to the temple, you can admire mummified crocodiles, exposed in the three vestibules, unfortunately in a poor state of conservation, which precede the double sanctuary of Horus and Sobek, clay coffins, and beautiful reliefs on the walls. Some of the three hundred mummies of crocodiles discovered in the surroundings are exhibited in a museum not far from the temple.

Much of the temple was destroyed by floods due to its proximity to the river, earthquakes, and also by subsequent builders who used the building as a building quarry, moreover some of the internal reliefs were defaced when the temple was transformed into a Coptic Orthodox church.

Check our Egypt vacation packages or Egypt Nile cruises to discover the best of Egypt!

Need Help? Chat with us
Start a Conversation
Hi! Click one of our member below to chat on Whatsapp
The team typically replies in a few minutes.
王梦寅
华人市场部-王梦寅
Egypt Time Travel
Egypt Time Travel