Where is Old Cairo located?

The district of Old Cairo (in Arabic Masr al-Qadimah) is located south of the city of Cairo, on the eastern bank of the Nile River, opposite the island of Rhoda. As the name suggests, the first populated areas of the later Cairo are located here.

The center of old Cairo is the military fortress of Babylon, which was used in the Roman and Byzantine eras, but may have had an ancestor. Turrets and walls are still preserved today. On the border between Upper Egypt and Lower Egypt, it had great strategic importance. At that time it was located directly on the Nile, which today flows about 400 meters to the west. Early after the Roman seizure of power, Legion stationed here. The castle was later extended and fortified, possibly during the reign of Emperors Trajan (98-117) and Arcadius (395-408).

In Arab times, this castle also received the name of Qasr al-Sham. The last name was first transmitted by the Arab historian al-Maqrizi (1364-1442), who assumed that the name was derived from the Persians who lit the castle towers with candles.

After the Arab conquest of Egypt by Amr ibn al-As in the years 639-642, the commander built his new capital, the Festat, here in the north and east of the citadel and north of the fortress, the first mosque of Egypt and Africa. For the Arabs to seize power, the invasion of this military fortress must be of decisive importance.

Fustat is the first Arab city in Egypt. Although the capital was moved under the ruling dynasties, the Umayyads, Abbasids, Toledo, and Fatimids, the city grew steadily. It spanned about 6 kilometers in the tenth century and had a population of 100,000 people. Fustat 750 and 1168/1169 destroyed several buildings in the old city. However, the city was rebuilt again and again. In the 13th century, Fustat was a center for the production of steel, copper, soap, glass, paper, sugar, and textiles.

In the area of ​​Al-Hosn and south of Al-Hosn, many churches were built, which are considered one of the most important viruses. Thus, the high percentage of Coptic Christians in this region’s population is not surprising. Christian Fustat reaches its climax around the thirteenth century: Abu al-Makarim (in the tradition that Abu Salih al-Arman performed at the beginning of the thirteenth century) counted 37 churches and 5 monasteries in Fustat. 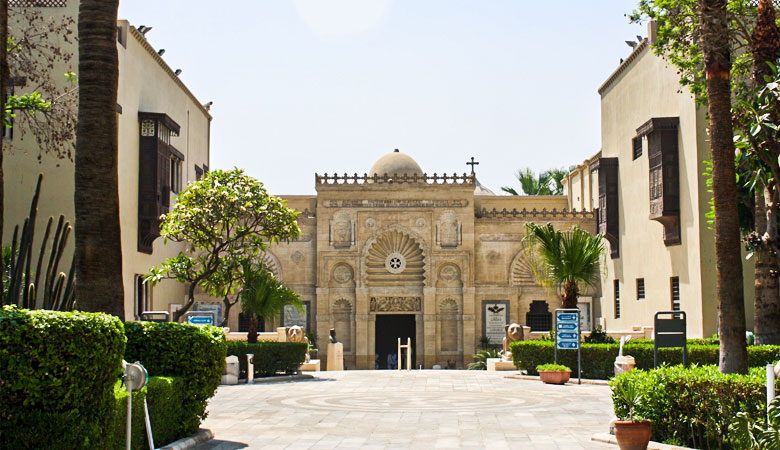 The museum is located in Old Cairo near the Hanging Church. It houses numerous architectural fragments as well as gravestones and frescoes, miniatures, textiles, weapons, and objects for the liturgy.

The 3 military fortresses, dating from early Roman times and extended several times, is still one of the most important Roman military installations, even though it was razed at the turn of the 20th century. The fortress is irregularly pentagonal with a narrow side to the south and from north to south about 300 meters long and 230 meters wide.

In front of the entrance to the Coptic Museum, the restored defense towers can still be seen, which have a diameter of 33 meters and were intended for the operation of a drawbridge. The Greek Orthodox Church of St. George was later built over the north tower. The architecture of the southern tower in particular can be studied very well. The walls consist of five to six layers of regularly hewn limestone, alternating with three layers of burnt red bricks in lime mortar.

3- The Hanging Church in Old Cairo 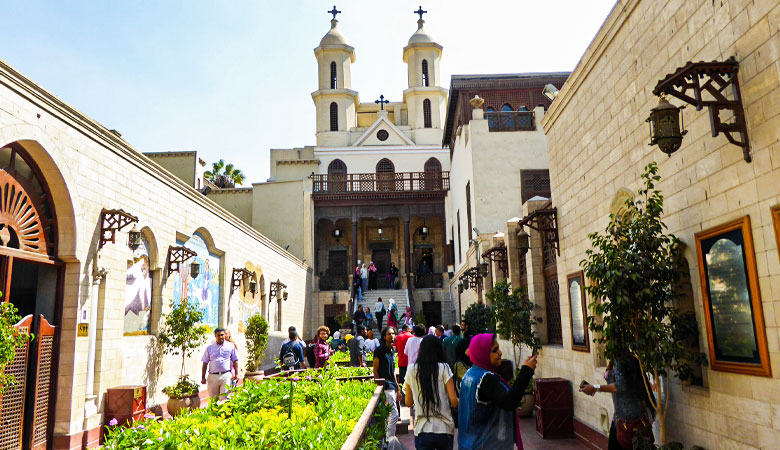 The most famous church in Old Cairo (Coptic Cairo) is the Hanging Church, the el-Mu’allaqa, also el-Mo’allaqa, which was built over the south gate of the fortress and is located south of the Coptic Museum. The church dates from the fifth/sixth century, as evidenced by a wooden lintel depicting the entry of Christ into Jerusalem – now in the museum – and is dedicated to the Holy Virgin (Arabic: كنيسة العذراء مريم, Kanīsat al-ʿAḍrāʾ Maryam).

The church was rebuilt at the time of the Patriarch Abraham the Syrian (975-978). With the transfer of the patriarch’s seat from Alexandria to Cairo, the church gained in importance. Beginning with Patriarch Christodulus (1047-1077) and continuing into the 14th century, numerous patriarchs were elected, consecrated and enthroned here (previously in the Church of St. Sergius), and the church served as their residence and in some cases as a burial place.

⇒ Read the full article about The Hanging Church

North of the entrance to the Coptic Museum, above the fortress tower, there is the Greek Orthodox Church of St. George and the associated monastery. The church is also the burial place of the Greek patriarchs. The monastery was probably first mentioned in the 6th century by Theodosius, first sure mention is found in the chronicle of Eutychius (877-940) from the 10th century.

The present church is a rotunda dating from 1909 (consecration on 1 November), crowned by a dome and to which a staircase with 56 steps leads up. The previous building had burnt down five years earlier. Near the entrance, inside to the left, there is a large silver relief of St. George. The modern iconostasis shields the only altar, it shows the images of St. Virgin and Christ.

5- Church of St. Sergius and Bacchus in Old Cairo

Almost at the northern end of the enclosure wall, there is an underpass that leads to the interior of the old fortress with several churches and the Ben Esra synagogue.

Behind the passage, on the left, there is the 6 nunnery of St. George, Deir al-Banāt, which has existed here since about the 15th century. The buildings including the modern church of St. George are grouped around a courtyard.

If you follow the turning of the alley to the right, you will reach the 7 Church of St. Sergius and Bacchus. This is the oldest church in Cairo and, according to tradition, it was built at a resting place of the holy family during their flight. It is named after two military saints and martyrs who suffered their martyrdom in Syria, in er-Rusafa, at the time of the Roman Emperor Maximinus in 296. The church was built at the end of the 7th century by Athanasius, a secretary of the governor ʿAbd el-Azīz ibn Marwan (685-705). The church served as a bishop’s see until the 11th century.

⇒ Read the full article about Church of St. Sergius and Bacchus

The church was also built at the end of the 7th century by Athanasius, a secretary of the governor ʿAbd el-Azīz ibn Marwan (685-705) and was originally dedicated to St. Cyrus (Abū Qīr) and St. John, both doctors. The relics of St. Barbara from the church of el-Muʿallaqa were transferred to the new building from the 11th century. The father of St. Barbara from Nicodemia, the Roman governor Markarian, first had his daughter tortured after her conversion to Christianity and later murdered together with her companion. At the time of the historian el-Maqrīzī in the 15th century, it was one of the most famous churches of its time. 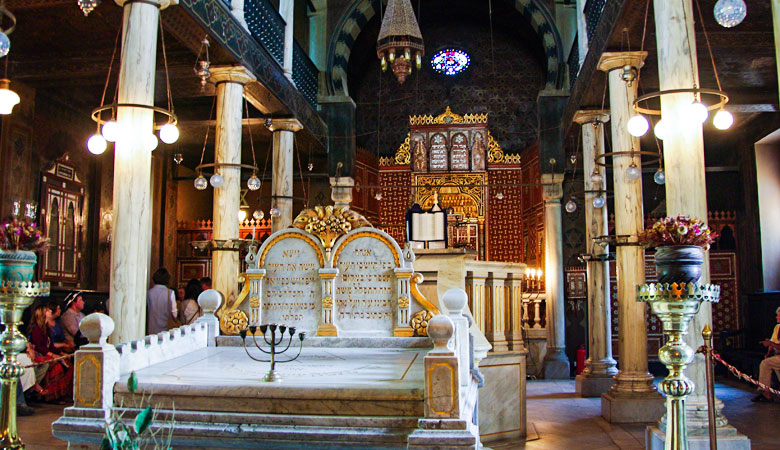 It is the oldest synagogue in Egypt. In the 1980s the synagogue was restored by the Egyptian Antiquities Service and the American Jewish Congress. Today it serves as a museum, services no longer take place here. The synagogue can be visited daily from 9 to 16 o’clock.

In 641 the grounds of the present synagogue were handed over by ʿAmr ibn al-ʿĀṣ to the Coptic community, who according to the New Testament consider Jeremiah as one of their prophets. With the seizure of power by Aḥmad ibn Ṭūlūn (835-884) an annual tax of 20,000 gold dinars was imposed on the Christians. Rabbi Abraham ben Ezra (1092-1167) from Jerusalem, in negotiations with the Patriarch of Alexandria, succeeded in getting the Christians to hand over their church to the Jewish community because they paid the Christian tax.

The oldest mosque in Egypt and Africa, the Mosque of Amr ibn al-As was built in 642/643 (22 AH) in Amr ibn al-‘Al, although its current appearance no longer corresponds to the original mosque.

The mosque was completely rebuilt during the reign of the Umayyad Caliph Muawiyah I and received a minaret. 711 (92 AH) The mosque was expanded through a concave prayer place. In 827 (212 AH) the mosque had its current dimensions, and seven naves were built in front of the prayer niche. The four minarets in the corners, which were present at the time, are no longer preserved.

The mosque was destroyed in the Al-Fustat fire 1169 (564 AH), but it was rebuilt four years later during the reign of Sultan Salah al-Din.

Old Cairo has a history that has been enriched by the oldest civilizations. From the time of the pharaohs to the present day, the Greeks, Romans, Byzantines, Arabs, and Ottomans have established themselves. Each of these groups contributed part of their culture and left a mark of their passage.

When visiting Old Cairo, you can enjoy an unforgettable walk along the walls of the ancient Roman fortress, the hanging church, the Ben Ezra synagogue, the church of Santa Barbara and the mosque of Amr Ibn Al-‘As, which dates from 642 AD and was the first to be built in Egypt.