Al Montazah Palace is one of the greatest distinctions in Alexandria, in this place that you cannot miss. You will come across many palaces that were formerly royal residences of different families. So the care and beauty of the site are unmistakable and that is the case in the gardens of the Montazah Palace, Egypt.

Montaza Palace is distinguished by its beautiful and large gardens and royal palaces remaining from its royal heritage. The gardens of the Montaza Palace are a tourist attraction for the memory of those who visit Alexandria due to their vast extension and attractiveness.

These surround the palace with about 46 hectares, which in turn are surrounded by walls in the east, west, and south, and that to the north extends to the Alexandrian beach.

There is so much to see in Alexandria that you want to take another trip to Egypt!

The larger Al-Haramlik Palace and royal gardens were added to the Montazah Palace grounds by King Fuad I in 1932, as a summer palace, Then the royal family in Egypt exploited the palace to spend the summer vacation in it.

The vast grounds of Montaza Palace first had the Salamlek Palace, built-in 1892 by Khedive Abbas II, the last Muhammad Ali dynasty ruler to hold the Khedive title over Egypt and Sudan. It was used as a hunting lodge and residence for his companion.

The grand palace of Al-Haramlik and royal gardens were added to the Montaza Palace grounds, being built by King Fuad I in 1932 as a summer residence. It is in a blend of Ottoman and Florentine styles, with two towers.

One of these towers typically rises high above with elaborate Italian Renaissance design details. The palace has long open arches facing the sea along each floor.

The family of Mohammed Ali stayed in this palace while it remained in power from the mid-19th century until the year 1952. Belonging to the family from the year 1892, which was when King Abbas II ordered its construction in the area called Salamlek.

The palace was strongly influenced by the architecture of the Ottoman Empire and the Florentine style, something that is perceived in the mix of its forms.

By 1932, King Fouad was commissioned to build a much larger palace known as Haremlik. In turn, his son, King Farouk was in charge of erecting a bridge to the sea.

Whose function was that of container for the rise of the tide? Although the palace buildings are not accessible, what you can explore are the gardens and the beach. Because these spaces are open to the public.

In addition to containing Montazah Gardens Royal Field Inquiry, the site is also home to the Haramlek which is the site of a casino and a museum. The Salamlek is a luxury hotel in the palace property as well and is a popular choice for the many visitors to the ancient city.

Al-Haramlik Montaza Palace is a public museum of the Muhammad Ali dynasty family history and art objects. The Salamlek Palace is now an adjacent hotel.

Montazah Royal Gardens is distinguished by its beautiful gardens and royal palaces. Although the gardens are part of the more than 350-acre grounds of the great royal house known as the Montazah Palace, the Montaza Royal Garden occupies more than half of the property.

Then it is a place to discover and explore in great tranquility along with your walkthrough Alexandria. In these gardens, you will find a kingdom of nature worthy of admiration, where tall palm trees abound. In addition to a large number of gazelles, which walk through its extensions with great formality. 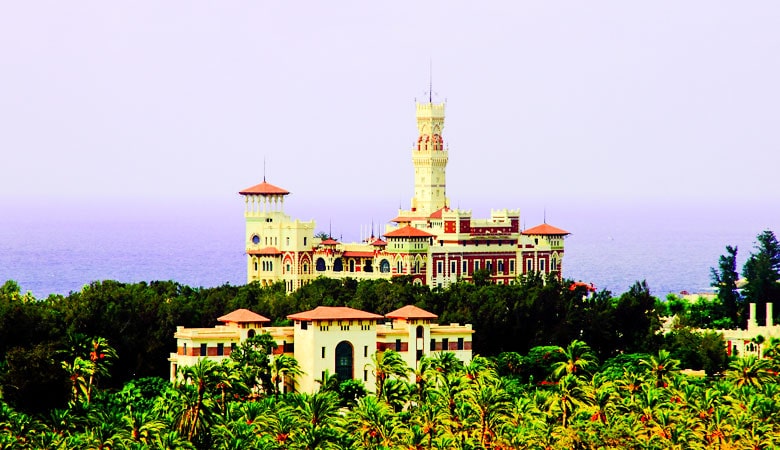 How to get to Montaza Palace Gardens, Egypt?

You can take an excursion or a taxi to take you to the key points of Alexandria.

Where is the Montazah Palace located?

Montaza Palace & al montazh park Alexandria are located along the shoreline as well, which means access to beautiful beaches and the warm waters of the Mediterranean Sea nearby.

The property includes an enclosed cove, with a specially constructed deck that allows small pleasure boats to come easily in and out of the bay without any worries of rough waters beyond the reach of land. Also, there is a charming lighthouse to help boats safely guide beyond the cove.

The Royal Gardens in Alexandria are somewhat unique where urban parks and public spaces are concerned as they are rigorously laid out and well equipped with benches and wading pools and swimming pools that are open for the public to enjoy. 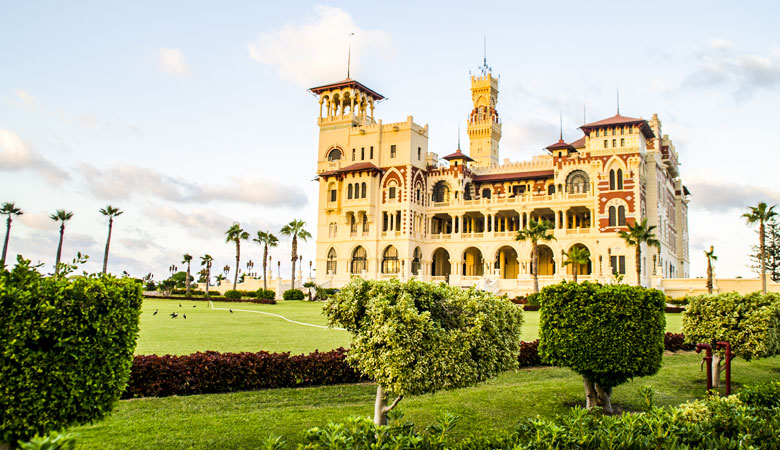 The entry price of Montazah palace is considered a low-priced ticket, as the ticket value is only 25 pounds per person.