Colossi of Memnon – The statues singing at dawn

The Colossi of Memnon are, in fact, two colossal stone statues which, placed in front of the city of Luxor, on the western bank of the Nile, have been observing their slow flow for millennia with their eyes turned towards the rising sun.

These two gigantic statues, 59 feet high, can be spotted by visitors from the east bank and have been known since ancient times for a mysterious sound emitted by one of them at sunset.

A poetic legend identifies in the sound the song of Eos (the Greek goddess of dawn), mother of Memnon, hence the name of the statues, who cried tears of dew every day for the death of her son, killed by Achilles during the Trojan War.

Memnon was a character of Greek mythology, born of the goddess and Titon (a prince of Troy), he was the King of Persia and Ethiopia, he sided with the Trojans in the last year of the Trojan War. 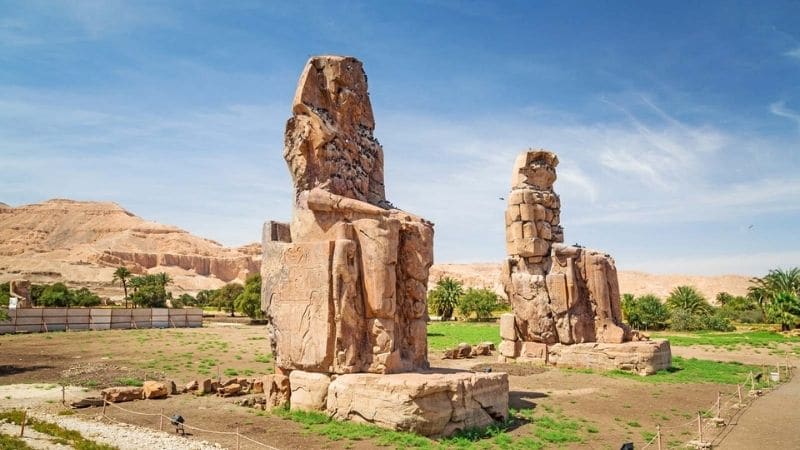 In 27 B.C. an earthquake caused the partial destruction of one of the Colossi: the upper part collapsed, while the lower one brought back only cracks, after this event the peculiar music began to be heard, coming from the lower half of the statue. It is believed that this sound was caused by the contact of air currents with the porous surface of the stones heated by sunlight.

Probably the increase in temperature causing the dew to evaporate produced a sound similar to a ‘melody’, but there is no way to verify this since the sound stopped producing hundreds of years ago, following a restoration.

Sounds of Colossi of Memnon

Since ancient times, Greek and Roman travelers used to go there to listen to music. The first testimony is from the Greek historian and geographer Strabo, who heard the legendary melody during a trip in 20 BC.

The phenomenon was also described by the Greek Pausanias and the Romans Tacitus and Juvenal, many travelers and even famous emperors went to visit this amazing attraction. Around 199, Emperor Septimius Severus had the statue restored and its singing stopped forever.

The sound determined the name of the statues since it led the Greeks to believe that they represented the immortal Memnon the statues represent Amenhotep III, the sovereign who reigned in Egypt about 3,400 years ago and his wife, Tiye. The statues presided over the entrance of a large temple complex that was believed to rival Karnak in size.

The ruler and his wife are depicted seated, hands resting on their knees and looking eastward towards the Nile. Every pharaoh of the New Kingdom had a sacred building built in his honor, while he was still alive, to affirm his divine nature.

The giants of Memnon stood at the entrance built by Amenhotep III. It seems that the temple of Amenhotep, with its 35 hectares, was the largest and richest temple in Egypt, so much so that not even sovereigns like Ramesses II and Ramesses III later managed to match such majesty. 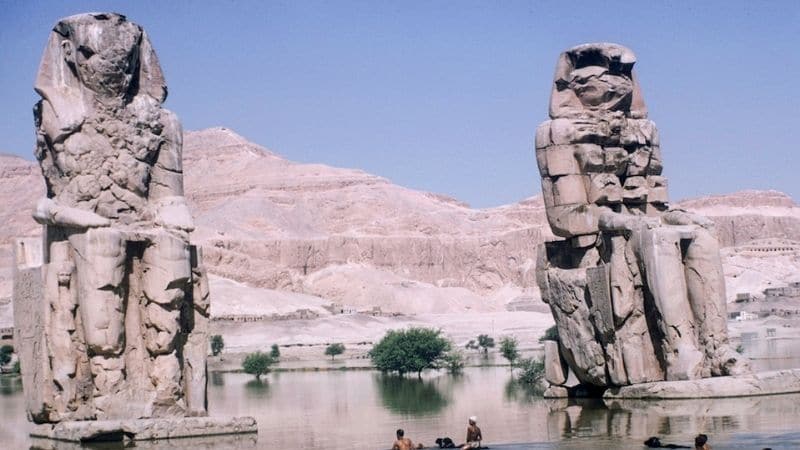 Amenhotep III, who ruled during the New Kingdom in the heyday of Ancient Egypt’s history, is considered one of the most prolific builders of Ancient Egypt. This temple would have been the most significant of his architectural designs, but nowadays unfortunately only a few ruins remain standing.

Archaeologists believe that the structure was quickly damaged due to repeated looting and because of its location not very favorable to conservation, the giants and ruins of the ancient temple are located within a flood plain of the Nile.

The limestone used for its construction was consequently eroded by centuries of exposure to periodic flooding. So today, unfortunately, except the Colossi, almost nothing remains of the temple, whose foundations were corroded year after year by the flooding of the Nile.

It is even thought that the enormous complex was already compromised in the Pharaonic era and that some stone blocks of the temple were already used for the construction of other buildings. Only the two large statues were spared, but they have reached the present day in a serious state of preservation. 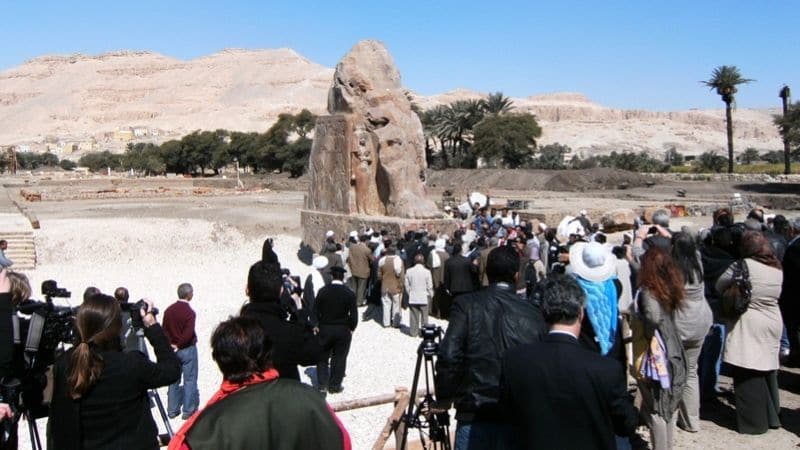