The Citadel of Qaitbay is located in Alexandria. And it is not only a monument but a wonderful example of historical heritage and architectural beauty.

Although from a distance it looks like a small sandcastle, the Citadel of Qaitbay is an impressive fortress and has become an important icon of the city of Alexandria.

Included in almost every tour in Alexandria, a visit to the Citadel of Qaitbay also offers tourists dazzling views of the Mediterranean Sea. 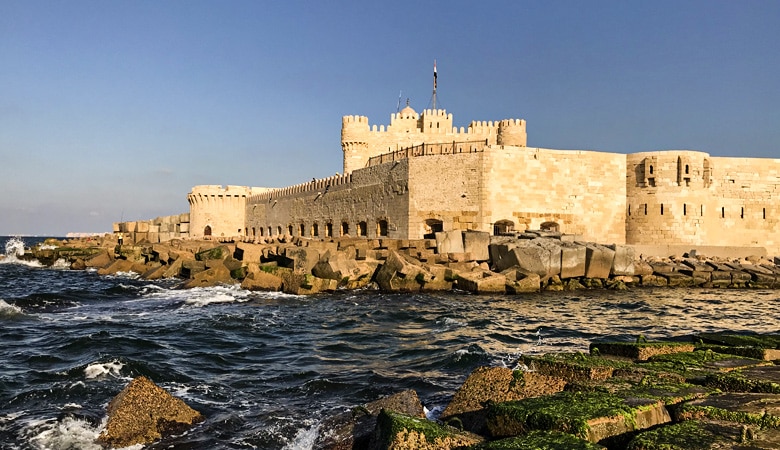 Geographical Location of The citadel of Qaitbay

The citadel is located at the western end of Alexandria, a strategic location as from there it protected the city against attacks from the Crusaders and others, from the 15th century onwards.

One of its peculiarities is that it was built with the ruins of the ancient lighthouse, which in turn was created in the third century AD and was one of the Seven Wonders of the Ancient World.

The lighthouse was almost destroyed during an earthquake that occurred in Egypt in 1303, during the reign of the Mameluke Sultan Qalaun.

The tour to the citadel of Qaitbay is a recommended tour for all tourists visiting the city. There are several trips to Egypt that include the Citadel of Qaitbay the half-day or full-day tour to Alexandria.

It can be accessed from Corniche (or Costanera) Street, going west. It is located at the end of Corniche Street.

History of The Citadel of Qaitbay

In June 1477, after celebrating the Prophet Mohammed’s birthday with his people, Sultan Qaitbay went to visit Alexandria, accompanied by several nobles, princes, and members of his royal family.

All of Alexandria was ready for the Sultan and his entourage. Qaitbay explored the place where the ruins of the ancient lighthouse were and ordered his men to build a fortified citadel in the same place.

Construction began in 1477 and was completed in 1479, with Qaitbay officially inaugurating it.

Sultan Qaitbay was one of the most important Mamluks of the Burji Dynasty who dominated Egypt for more than 150 years.

Al-Ashraf Qaitbay ruled for more than 25 years, between 1468 and 1496, and was considered one of the most important builders of that period.

Some of the monuments that are still preserved are the madrasa (school) and the funerary temple in Cairo, its mosque in Fayoum, among others.

No one could have imagined at that time, that the Qaitbay Citadel would one day become one of the most visited tourist sites by tourists on vacation in Egypt.

The designing and description of  The Citadel of Qaitbay

Between the walls, we can differentiate between the internal and external ones. The internal walls are shorter and are formed by the rooms for the soldiers and the armories.

The outer walls consist of four defensive walls to completely protect the citadel from any threat.

The eastern part of the outer walls overlooks the Mediterranean Sea and is two meters wide and eight meters high.

The northern side of the fortress faces the East Port of Alexandria and consists of two sections. The lower section is a covered passage, with several rooms that were used for tactical operations during attacks on the city.

The upper part consists of a passageway with narrower openings, used by soldiers to protect the citadel.

The interior walls were built using solid rock and surround the main tower almost completely, except for the north side.

The main Tower of  The Citadel

The main tower is the most imposing structure in the complex. It has a square shape and its dimensions are 30 meters high and 17 meters on each side.

It has three levels with cylindrical towers at the four corners of the main building with some small windows strategically distributed so that archers could shoot their arrows in case of attack.

The First Floor of  The Qitbay Citadel

On the first floor of the citadel, there is also a mosque, built in the Mameluke architectural style of the time.

It consists of four small “iwans” or galleries, an open courtyard, sahn in the middle, with its marble floor, and a beautifully decorated mihrab that paradoxically is not pointing towards Mecca because the architect who designed the citadel had the military use of it as a priority. This mosque had a minaret which, in time, was lost.

The second floor of the Qitbay Citadel

The second floor of the citadel consists of several passages, a large number of small chambers and rooms, and some large rooms that were used for different purposes. Because the Citadel of Qaitbay is one of the most important complexes in Egypt, various kings and rulers have given it their attention throughout history.

One of the first to make modifications to the fortress was Sultan El Ghory, the last Mamluk of the Burji dynasty to rule Egypt (1501-1516).

He renovated some sections, provided weapons and soldiers, and restored some parts that needed to be fixed.

The important rule of Qitbay Citadel throughout the ages

During the rule of the Ottomans, the citadel was considered a very important stronghold to protect the northern coasts of Egypt.

At that time, ranks and categories were added for the soldiers, dividing them into infantry, cavalry, and artillery.

When the French invaded Egypt in 1798, they took control of the citadel as a starting point to dominate the country.

Mohamed Ali, the builder of modern Egypt, recognized the importance of the citadel when he became the ruler of the country. He restored the walls and added cannons to preserve this strategic point of Egypt.

After the Revolution of Ahmed Orabi, the city of Alexandria was exposed to bombing by the British Navy and this produced some cracks in the walls that remained so for 25 years.

In 1904, the Committee for the Preservation of Islamic Monuments carried out several renovations, based on studies conducted by French scientists and academics during the occupation of Egypt.