Catacombs of Kom El Shoqafa cemeteries are one of the most important historical archaeological sites in the Kom El-Shoqafa area in Alexandria and it is considered one of the seven wonders of the medieval world, where the tombs of the dead in Kom El-Shoqafa combine a mixture of Roman, Greek and Egyptian culture. 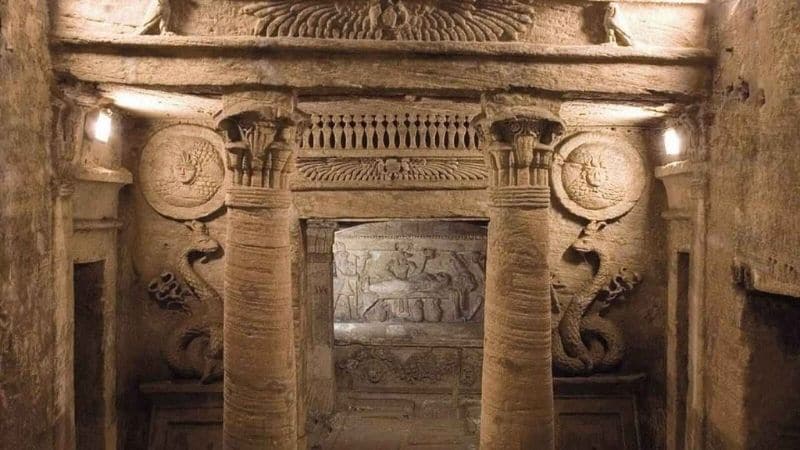 Introduction to The Catacombs of Kom El Shoqafa

Alexandria, the “bride or pearl of the Mediterranean”, was the capital of Egypt for a long period. There you can see a lot of unique monuments and almost impossible to find elsewhere in the country.

These Roman-style catacombs are wonderful examples of the influence of Ancient Egyptian art on Roman art.

The catacombs of Kom El Shoqafa are located in West Alexandria, south of the Mena El Basel district (or “Onion Port”, referring to the former onion trade in that area).

The catacombs can be reached by taxi from anywhere in Alexandria. However, it is advisable to book a tour with a reliable travel agency to enjoy the excursion to the fullest.

The characteristics of the Catacombs of Kom El Shohafa, their designs, and their decorations allow us to deduce that their construction was done in different periods, between the first and second century A.D.

Some of the objects discovered date from 117 and 138 A.D. Historians agree that the catacombs were used until the end of the 4th century A.D. and then abandoned.

The discovery of this important historical site was accidental: a donkey fell at the main entrance of the tombs, more than 12 meters deep on September 28, 1900, and this drew the attention of the archaeological mission that had been working in the area since 1892.

Today, the catacombs of Kom El Shoqafa are one of Alexandria’s main attractions. The entrance is using a spiral staircase of 6 meters in diameter and approximately 10 meters deep that surrounds cylindrical water well.

This staircase was built with larger steps at the beginning and smaller ones at the end, according to the common rituals of the Roman period, and leads to a first underground.

This consists of a corridor that connects to a circular room, known as “the Rotunda”. In the middle of it, there is a water well. To one side, there is a rectangular room, which was used as a banquet hall.

At the end of the circular room, some steps lead to a second basement, full of rooms, corridors, chambers, and most of the tombs of Kom El Shoqafa.

The “rotunda” or circular room has a dome and six columns supporting it. The water well is about 8.5 meters deep. The walls of this room are characterized by red geometric shapes. 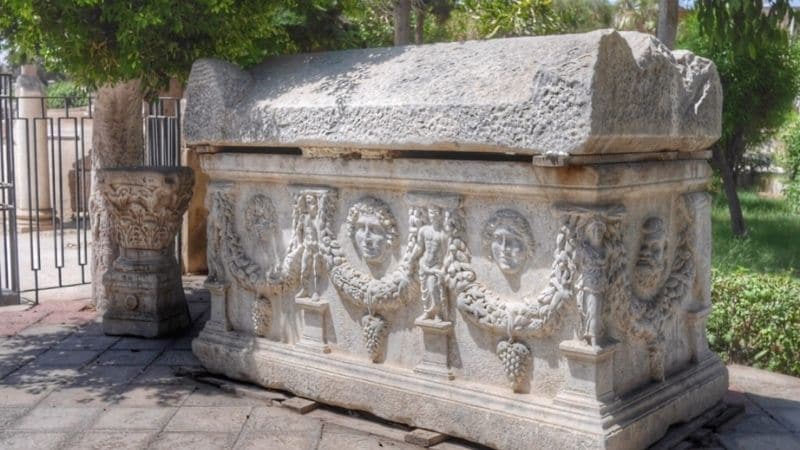 Five heads of alabaster statues were found on the site, which is currently on display in the Greco-Roman Museum in Alexandria.

The second room that can be seen is known as the “triclinium”. It is 9 meters wide and 8.5 meters long and has the most outstanding decorations of Kom El Shoqafa. In this section, the relatives of the deceased gathered for lunch, during their visit to the catacombs.

The most important part of the second underground is the room where there are three sarcophagi with Greco-Roman decorations. The middle one has reliefs about the complicated process of mummification in Ancient Egypt.

The walls of the room have scenes representing the Roman Emperor wearing his crown and presenting his offerings to the goddess Isis, who is protecting the deceased with her wings.

As you leave the main chamber of Kom El Shoqafa, you can see the god Anubis, in soldier’s clothes and Roman weapons, standing in front of a pharaonic door.

On the right side, the god Anubis is also represented, but this time with a human body and a dragon’s tail. All these scenes were derived from the mortuary art of Ancient Egypt.

Who built the Catacombs of Kom El Shoqafa?

The cemetery of Kom El Shoqafa was built in the Roman era, and it was found by chance in September 1900, when a donkey fell into the main hole of the cemetery, and while searching for the donkey, this amazing trace was found.

The ticket for the Kom al-Shuqafa cemetery is 80 pounds, and 40 pounds for students, The visit is available from eight in the morning until five in the evening.

Why is the Catacombs of Kom El Shoqafa a wonder?

The catacombs in the Kom al-Shoqafa cemetery are one of the Seven Wonders of the Middle Ages, due to their combination of the Greek, Egyptian and Roman civilizations and their walls containing the distinctive inscriptions of each of them.

The tombs of Kom al-Shoqafa consist of a group of underground catacombs, most of which belong to the Romans, who were influenced by the Pharaonic civilization through the inscriptions used in the tombs, and people usually enter to visit those tombs through stairs leading to the main cemetery.

And also the waiting room that contains Anubis (god of The dead) dressed as Romans, and some statues of the Roman emperors who ruled Egypt during this period.

Reason for the name

The Kom El Shoqafa was named of this name because of the large number of pottery remains and quarries that were accumulating in this place.

Get up to 10%Off when booking one of our Egypt Vacation Packages check then now!