Abu Simbel Temple, one of the most famous and important monuments in Egyptian history and culture, especially in the Pharaonic era.

This extraordinary monument built in the past about 3000 years ago and located on the western shore of Lake Nasser in the city of Aswan. It is 33 meters high and 38 meters long.

This site is located south of Aswan along the shores of Lake Nasser and is the most famous in all of Egypt after the Pyramids of Giza and the Sphinx.

The great temple of Abu Simbel built by the greatest of the pharaohs, Ramesses II.

This huge temple carved into the rock marks the southern border of the ancient Egyptian Empire with Nubia.

It is a very famous archaeological site in Egypt, especially in Aswan.

There are 7 statues at the entrance of the other temple, 4 statues for King Ramses, and the other 2 statues for his Nefertari wife.

They say that the temple was built to celebrate the victory in the battle of Qadesh with his wife.

What does the temple of Abu Simbel consist of

Historians and Egyptologists have done careful research in Egypt and ancient history and have discovered that the four statues at the entrance to the main temple are also the largest sculptures dating back to the ancient Egyptian Pharaonic era.

Their realization was intended to convey the power of the rulers of Egypt or anyone who laid eyes on them, and in fact, the great statues of Ramesses and his bride Nefertari still inspire a certain fear today.

The Temple of Abu Simbel: was built by two temples; the first one is the great temple to Pharaoh and is 30 m high and 33 m long and the second one is a small temple dedicated to Nefertari.

Abu Simbel was rediscovered under the ruins in 1813 by Swiss John Lewis Burckhardt.

The sands of the desert had covered almost their entire structure, leaving the tops of the heads of the huge statues in front of their entrance uncovered in 1909 when the sand was removed, these twin temples became the most popular in all of Egypt.

Temples of Abu Simbel, the move 50 years ago

The organization of Unesco has chosen the temple of Abu Simbel as a very historical and important archaeological site in the field of tourism that could help to increase the level and numbers of tourists visiting Egypt, especially Aswan and Luxor.

Every tourist knows very well there is a very famous event called the miracle of the sun.

It happens twice a year, on February 21and October 21.

The construction of the temple lasted up to 21 years in the time of King Rameses II.

The temple of Abu Simbel found destroyed underground due to earthquakes and floods.

The temple of Abu Simbel includes many ancient monuments and many precious rooms for “Ramses II”.

Many manuscripts in hieroglyphic language told all the details of history and what they did during that time.

Every detail inside the temple reflects the history and greatness of our Egyptian pharaohs.

The second temple built in honor of Ramesses’ favorite wife, Nefertari, and dedicated to the goddess Hathor.

The temple has six colossal statues on its façade, four of which depict Ramesses and two Nefertari.

Do you have a passion for the Egyptian history of the pharaohs? Want to know more about Ramses II and the Temple of Abu Simbel?

You can book your tailor-made trip to do a Nile Cruise and then a special visit to Luxor and Aswan.

Don’t waste time and check our Egypt vacation packages and spend a different and unique Christmas and New Year.

The sun miracle in Abu Simbel on 22 February

The temple aligned with the sun at two different times of the year.

Hundreds of tourists come to see how sunlight passes through stones and lights the temple up.

Statues of Ramses, the gods who lived in this temple show the knowledge of the ancient Egyptians about astronomy.

You can visit Abu Simbel temple to witness the miracle of the sun and enjoy the beauty of the view. [Check our Aswan day tours & Abu Simbel day tour]

The temples are a few hours’ drive south of Aswan, but most tourists arrive in Abu Simbel by plane.

The flight from Aswan takes 30 minutes, with two departures per day planned to give visitors about two hours to visit the temples.

It is also possible to reach Abu Simbel on a cruise across Lake Nasser.

Don’t miss to check our Luxor and Aswan Nile Cruises! 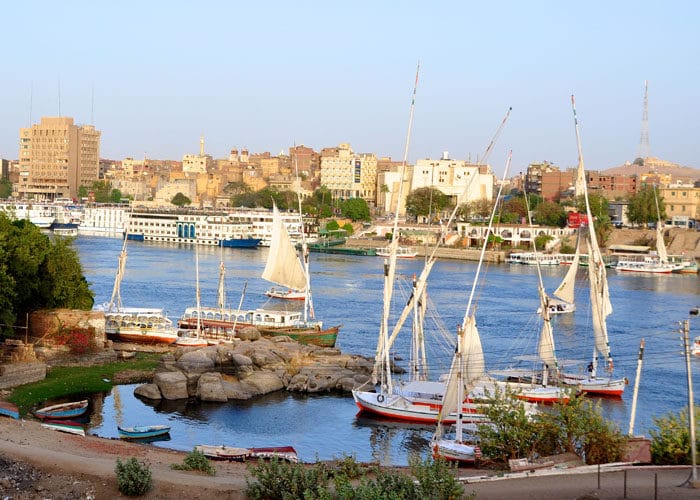 Aswan is located on the cataract north of the Nile, Aswan marked the traditional southern border of Egypt with the enemy territory of Nubia, it had great importance in the ancient Pharaonic era on the historical and security side, when we read the ancient Egyptian history we can see that the city of Aswan has contributed a remarkable role in history and battles against enemies who wanted to conquer Egypt, the Nile River also played a very important role in the economy and politics. 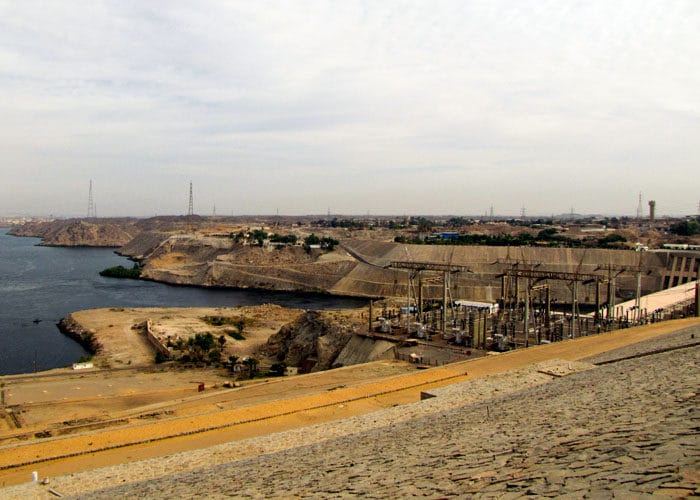 One of the beauties of the Nile is the Aswan Dam and the artificial lake that it generates: Lake Nasser. Although the dam has caused a not inconsiderable environmental impact, the view, especially from above, is breathtaking. Strongly desired by Nasser to solve the problem of drought, Egypt at the time was one of the driest countries in the world, it made it possible to cultivate miles and miles of desert. 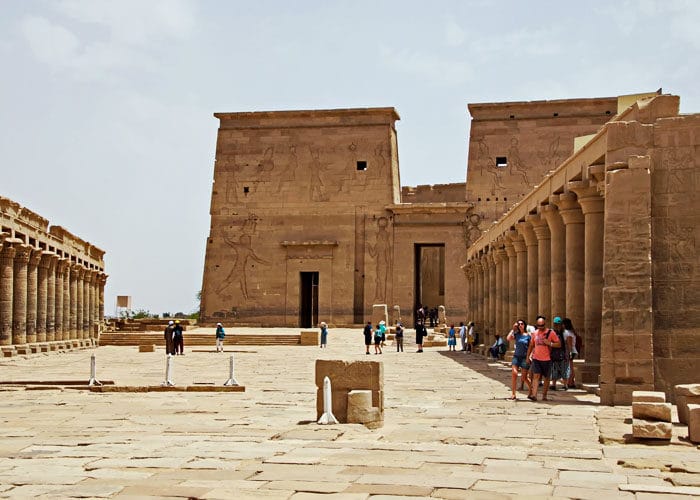 Located 3 miles from Aswan train station, File Temple has an elaborate and impressive structure. The beautiful granite, the polished stones, the richly elaborated capitals of various shapes and the ceilings with beautiful astrological designs are elements of great beauty that have no comparison in the ancient world. In File, the oldest monument dates back to the era of the XXV dynasty, consecrated only later to Isis with the construction of the magnificent temple that still occupies a large part of the island. 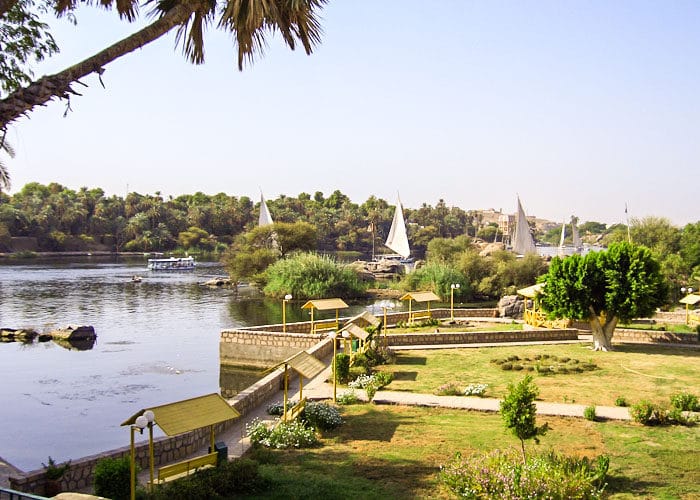 Elephantine Island is a small island located in the middle of the Nile, facing Aswan, the beautiful city of Upper Egypt. Elephantine Island is a classic and unmissable destination for tourists visiting Aswan. For centuries it was the beating heart of this city, inhabited even since 3,000 BC, and most tourists when they make a trip to Egypt must necessarily visit the elephantine island as it is considered a very famous tourist symbol in Aswan. 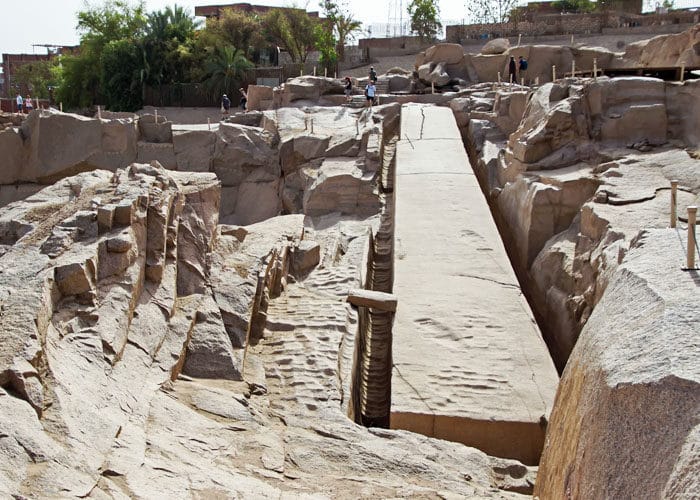 The obelisk located about 2 km south of the city of Aswan, Egypt, can be contemplated: giant, tall and still lying in its bed of pink granite. We are talking about the unfinished Obelisk of Aswan, abandoned in the place of construction probably due to a fracture in the process. 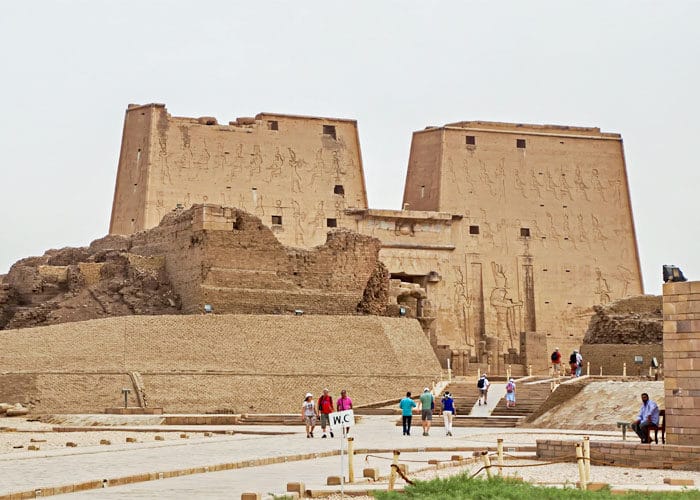 Edfu is a city of about 60000 inhabitants, located on the west bank of the Nile, between Esna and Aswan to be precise; this splendid Egyptian city, surrounded by palm groves, desert, and suggestive granite mountains, has much to tell about its ancient past, starting from the time when it was the important capital of one of the regions of Upper Egypt. 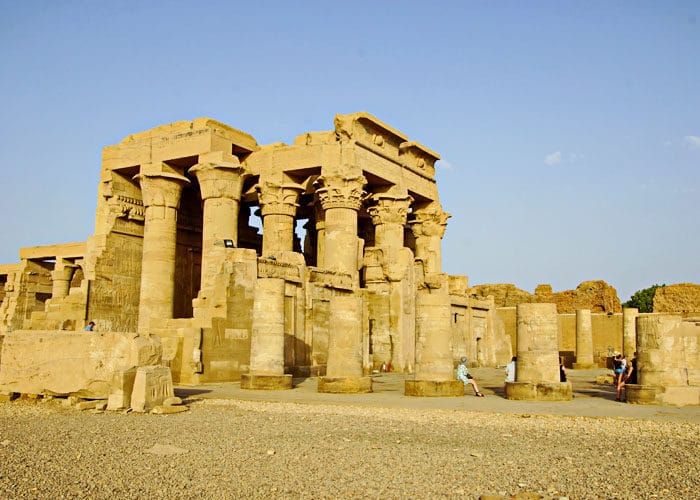 The Kom Ombo Temple is located in the homonymous village of Upper Egypt, in the south of the country. This place of worship was built during the rule of the Ptolemaic dynasty. It is particularly beautiful to reach the site on board a cruise on the Nile, the temple stands right on the bank of the Nile, where ships dock, it is a sight to see the figure that stands out on the promontory of Kom Ombo (the hill of Ombos) overlooking on the small recess of the river basin. 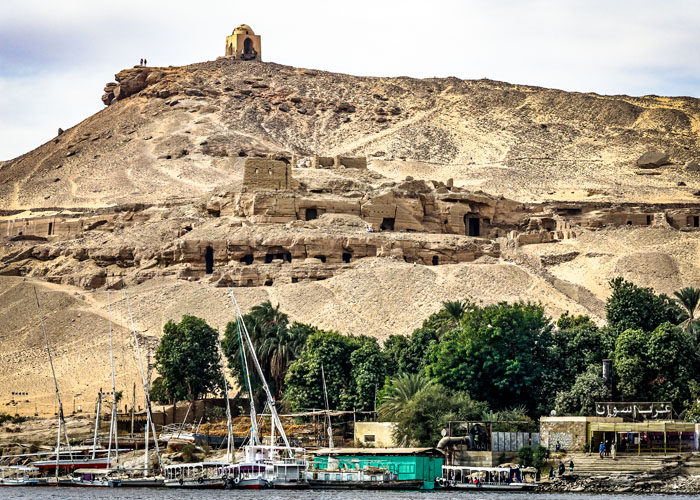 In 2008, the University of Jaén began an ambitious multidisciplinary research project centered on the excavation of the tombs of the governors of Elephantine (a river island in the Nile) buried in what is now known as 'Qubbet el-Hawa'. The importance of the site and the interdisciplinary nature of the work have received the confidence of the Spanish government in the form of funding for two R+D+i projects since 2010. 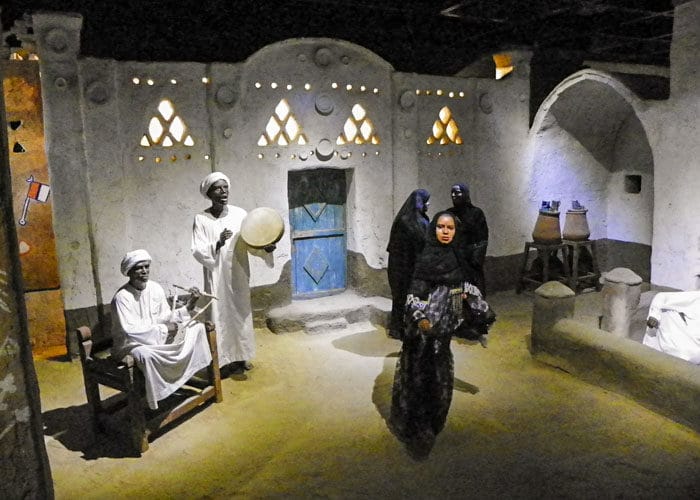 Founded in 1997, the Nubian Museum is the result of ten years of work and today is considered one of the most important museums in Egypt. Aimed at preserving ancient Egyptian monuments that had been rescued from the waters of the Nile and those that had been discovered during operations, the creation of the museum combined the efforts of local researchers with the assistance of UNESCO.